Train for your aviation future at NZ’s most experienced helicopter flight school.

As Wanaka Helicopters is also a commercial operator, trainees actively participate and help in operations as part of their training.

The New Zealand Diploma in Aviation (NZDipGA) has been developed by the New Zealand aviation industry for both fixed and rotary wing pilots. It is a nationally recognised qualification administered by NZ Government under NZQA and Service IQ.

Only four helicopter flight schools in NZ are approved to conduct the Diploma in Aviation which allow them to offer student loans for flight training. Wanaka Helicopters is the largest and most experienced of all those schools.

The Diploma results in candidates graduating with a Civil Aviation Authority (CAA) Commercial Pilot Licence, Helicopter (CPLH) and a Diploma in Aviation. The Diploma comprises more than 25 unit standard courses and modules combined into a two-year qualification.  These courses encompass topics and aspects of aviation over and above those required for a basic commercial pilot licence.

The Diploma is structured to start a professional pilot on a career path. Graduates will attain considerable extra operational and theoretical knowledge and practical skills that put them at an advantage when seeking employment as commercial pilots.

The purpose of the Diploma qualification it to provide the General Aviation sector of the New Zealand Aviation Industry with graduates who have attained above average operational and theoretical knowledge and practical skills to operate as commercial pilots and associated support staff in all aspects of aircraft operations.

After successfully completing the course, a graduate will be a fully qualified commercial helicopter pilot, with type ratings for various single engined helicopters, be able to exercise the privileges provided for by CAANZ in New Zealand including, but not limited to, commercial flying operations, ground based operations, flight planning and assisting operators with their safety management systems (SMS).

The NZ Government provides a range of funding options for students enrolled on a Diploma in Aviation. These include Student loan funding, up to a total of $70,000 over two years, NZ Māori Scholarship (up to $10,000) and FeesFree funding (up to $12,0000) for eligible students which makes the Diploma a popular avenue for career-oriented pilots.  For more information about FeesFree go to www.feesfree.govt.nz and enter your National Student Number (NSN) to see if you are eligible.

A self funding component portion is required to be funded by the student for the initial Private Pilot License. In addition, the NZ Govt will also provide full time students with  living expense allowances whilst studying for the Diploma. The amount provided will vary depending on individual personal circumstances.

These funding options make the Diploma in Aviation a very attractive option to kick start an aviation career. Jared’s fascination with helicopters came as a child when the local search and rescue helicopter was based next to his house. Thinking helicopters were “pretty cool” he had some private lessons in his early twenties, bought a logbook and was soon hooked on flying.

Taking advantage of an interest-free student loan, Jared decided the Diploma in Aviation (Helicopter) was the perfect training to start his aviation career. After starting flight training at another school Jared transferred to the Wanaka Helicopters Diploma Programme in 2015.

Jared most enjoyed being able to learn to fly in an environment people come from all around the world to see. The challenges of technical mountain flying, nearby low fly training zones, high flight hours of instructors, and the family atmosphere we provide made it a great fit for him.

Jared found the additional courses undertaken during the Diploma useful, particularly those around safety management systems and crew resource management. Jared says “At the time I didn’t know when I would ever use some of the content but it has proven really valuable in my current job based in Papua New Guinea.”

The perfect job rarely shows up right after graduation. So Jared juggled truck driving while taking on part-time ground crew, frost protection and maintenance flight operations for a New Zealand operation after completing his Diploma.

Within a few months however, an opportunity he couldn’t refuse came knocking! Putting his best foot forward in his CV, adding some great references from our instructors and a willingness to move quickly resulted in a job flying Bell 212’s in Papua New Guinea.

Starting within a week of applying, Jared was off to Port Moresby with a three year contract working for an operator that supplies helicopter services to the Papua New Guinea Defence Force. Jared’s work involves moving Defence Force personnel around for border protection, soldier deployment into areas of civil unrest and operating a winch capable helicopter for search and rescue. A very mountainous and remote terrain with dense rainforest up to 14,000 ft means helicopters are the easiest way to transport personnel and equipment around the country.

In his third year of duty he will focus on work around oil and gas operations undertaking pipeline surveillance and personnel transport in a Bell 412 Helicopter. Jared’s goal is to work longlining with twin engine helicopters and to eventually be a pilot back in Wanaka or Queenstown, “The Helicopter Capital of New Zealand!” 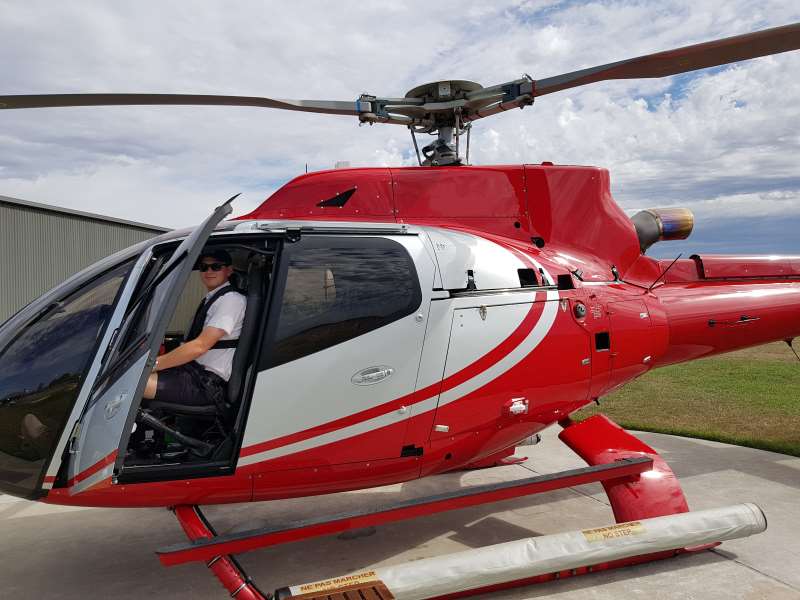 Jeremy was lucky to grow up around aviation so it is no wonder he decided to later study the Diploma in Aviation. Both of his parents worked as air traffic controllers which meant he was exposed to a range of different aircraft from a young age. “I’ve always loved anything to do with aviation, I was always going to do something along that line, however helicopters were always the main attraction for me”.

Pursuing a career as a helicopter pilot was made possible with the ability to apply for an interest free student, eligible with the Diploma program. Securing this funding, Jeremy enrolled in the Diploma in Aviation and transferred to Wanaka Helicopters in 2015 after starting training with another training school, “I had heard about Wanaka helicopters level of training before and I was instantly very keen to finish my training there”.

Jeremy most enjoyed sling load flying “Sling was a highlight of my training, the best part of Wanaka Helicopters training is the emphasis on practical training I believe that makes you very employable because it means you can arrive at your first job ready to work”. After successfully completing the Diploma of Aviation in December 2015, Jeremy moved back to Christchurch for a short time.

Jeremy heard through Wanaka Helicopters industry networks about a job opening in Australia, within a week he was on a plane heading for a working trial. A successful work trial culminated in a job offer to being his piloting career flying Robinson 44 helicopters. After twelve months he was offered a rating to fly H130 helicopters. Jeremy has steadily built his flight time to over 500 hours in the last year and a half.

“The thing I love most about flying is that you are in an ever changing office, whether it is where you are flying on any given day or the weather conditions you are flying in”. Jeremy’s dream is to eventually work back in the South island of New Zealand flying passengers in and around the spectacular Southern Alps.

You’re one of a kind and so are we so why go anywhere else?
Contact us NOW to start your aviation career!